Best Minnesota Beers According to Our Customers 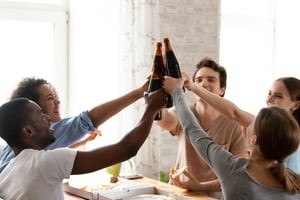 Whether during the dead of our harsh winter or on one of our sunny summer days, Minnesotans look forward to enjoying themselves with the best Minnesota beers.

And that’s pretty easy to do. At recent count, there were more than 150 craft breweries in Minnesota alone! The nationwide Brewers Association has rated Minnesota brewers (like Surly and Summit) among the best craft brewers in the United States. Beer made in Minnesota is on tap in hundreds of bars and restaurants, and it’s distributed around the Midwest and the country – some even around the world. This is clear: not only does our state make a lot of beer in a lot of places, but we also have some pretty damn good brews that other states would be jealous of.

So with all those massive numbers of options, how do discerning Midwesterners pick the best Minnesota beers? We polled our favorite people – you – and collected some of our favorite responses and best recommendations.

Customer Pat says, “So many to choose from! Modist Brewing Ritual Night Mexican Dark Chocolate Stout and Surly Brewing Bender Brown Ale have to be at the top of my list.”

Dating back to 1865, this is a classic American light beer with Minnesotan origins.

One of the most popular IPAs around Minnesota for the past couple years, Dreamyard is a hazy, juicy IPA that leans into citrusy effervescence. Less bitter, lots of flavor.

A bold IPA with a big aroma and the flavor of zesty orange peel.

Balanced, bright, and bursting with a bouquet of hops aroma for Minnesota days and nights.

Haskell’s customer Jacqueline says Pryes’ signature brew Miraculum is “a well-balanced, award-winning brew. It's an easy drinking beer. Plus, it's made from the purified waters of the Mississippi, a nod to the brewing legacy of the state.”

A juicy, sweet IPA with Centennial, Cascade, and Chinook hops. So much fruity flavor, you might want to enjoy it with Saturday morning cartoons.

Think tropical fruits like papaya and mango in this hoppy India Pale Ale, which has sweet malt notes come through the bitterness.

This medium-bodied Belgian-style Ale is smooth and well-rounded with a hint of spiciness.

Toasty, rich, and perfect for cool nights up north.

One of the lightest, dark beers you will find. Deep amber color with a light maltiness and a mild hop bitterness.

Not quite an IPA, but don’t underestimate this big hops-flavored beer that offers plenty of malty richness as well.

With so many great Minnesotan beers, you now have a cheat sheet for where to start. Prost!

So, what's your favorite Minnesota brew? Fill in the comments below, we'd love to hear what you like.

Topics: Made in Minnesota, Beer