New England vs. Philadelphia: Team-Themed Drinks for The Big Game 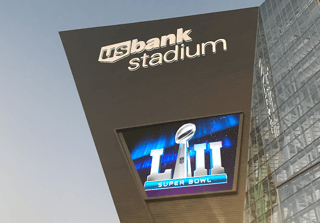 The biggest Sunday in football is right around the corner and, better yet, it's in our own backyard at U.S. Bank Stadium. So, whether you missed the Big Game the last time it was in town — the Washington Redskins beat the Buffalo Bills in 1992 at the Metrodome — or you've been anxiously waiting for the day it returned, it's a game you won't want to miss.
But, do you know who you're rooting for? If you're a Minnesota Vikings fan, like we are, you're likely still mourning the unbelievable defeat in Philly, therefore making you a first-time New England fan. Go, Patriots! If you're a Jacksonville Jaguar fan, you might be rooting for Philly after the loss to New England. Either way, you've picked a team to root for. So, what's the best way to celebrate your new fandom? With drinks and food, of course!
Give your football party some extra flavor with beer, drinks and even food native to each city, whether you're showing team spirit or just numbing the pain of the Vikings' missed historical opportunity.

The New England Patriots are no stranger to the biggest football game of the year. In fact, they'll be playing for the championship for the 8th time in 17 years. It's also not the first time they've met face-to-face with the Eagles for the title. In 2005, the Patriots beat the Eagles 24-21. So, can New England clinch a sixth title under the helm of Quarterback Tom Brady and Head Coach Bill Belichick? We'll have to wait and see.
Looking to celebrate the big game in style? Try a signature cocktail from the New England area.
Shake with ice and strain into a red wine glass filled with ice. Garnish with orange, lemon and cherry. Serve with straws.
Fun fact: Ward Eight was invented in 1898 by Tom Hussion, a bartender at the Locke-Ober Café in Boston. It was the third oldest restaurant in Boston, open from 1875-2012.
Not a fan of mixed concoctions? Enjoy the game with one of these craft beers brewed in the heart of New England Territory.
You can't forget the football snacks. Truly embrace the team's native culture with this New England Clam Chowder recipe.

The Philadelphia Eagles have only played in the Big Game twice since its inception. The team and their fans are hungry for their first title. But can they pull it off against Tom Brady, the only player to win five titles with the same team?
It seems Philadelphia is more known for its food than signature beverages. That is until Philadelphia Magazine hosted a contest searching for the best Philly signature cocktail. The winner?
Combine in a shaker, shake well and strain into a cocktail glass. No garnish.
Fun fact: The Philly Flyer was created in 2011 by Rick Fitzgerald, an amateur who doesn't tend bar for a living. Rick beat 17 other bartenders to earn his drink the title of Philadelphia's signature cocktail.
If a mixed drink isn't your thing, stock up on these Pennsylvania-brewed beers for the big game.
And how could we forget the Philly Cheesesteak? Pat's King of Steaks Philly Cheesesteak is one of the best in the city. Click here for the recipe.
Don't forget about all the fun Super Bowl Live presented by Verizon activities happening right outside our doors on Nicollet Mall in downtown Minneapolis the 10-days leading up to the Big Game. While you're exploring the area, stop by the new Haskell's Wine Bar (901 Nicollet Mall) to warm up, have a glass of wine, tall beer, or a bite to eat. We welcome any and all football fans!