Catch Up On the History of Tequila for Cinco de Mayo

What do you know about tequila? Maybe it's the smooth, not-sweet-but-not-harsh flavor. Maybe you remember the thing with the worm (which is false, actually – that's only in mezcal, not true tequila). To get in the Cinco de Mayo mood, we're sharing the history of tequila, all the way back to its roots – or should we say "heart"? – in Mesoamerica and the Spaniards who all but conquered it.

Sap, Spaniards, and the History of Tequila

Around 1000 CE, a nobleman named Papantzin discovered the process for wringing sap from an agave plant found in the ruins of the Teotihuacan civilization. Called aguamiel, or "honeywater," the sap was used medicinally or, once fermented, enjoyed as an alcoholic beverage called pulque (imagine a thick, milky, sour beer).

Spanish conquistadors led by Hernán Cortés entered the picture around 1500 CE, decimating and subjugating huge portions of the then-dominant Aztec culture. Thirsty and unable to procure more of the brandy they'd brought with them, the Spanish eventually resorted to distilling mud and agave, one of the first distilled spirits of North America: mezcal.

While it wasn't exactly tequila (because it wasn't made from the heart of Agave tequilana, the blue agave plant), their innovation paved the way for what would become the ubiquitous Mexican spirit.

Within about 100 years, King Carlos IV of Spain granted the first license for commercial tequila-making to a man named Jose María Guadalupe de Cuervo, son of Don Jose Antonio de Cuervo (yes, that Jose Cuervo). Using some of the same techniques used by Papantzin and the Toltecs hundreds of years earlier and applying them specifically to the heart of blue agave, the Cuervo family's distillery in Tequila, Jalisco marked the start of the tequila industry – and gave the drink its name.

Some time later, Sauza Tequila began to export tequila to the United States, turning the national tequila industry into an international business and introducing tequila to America for the first time. 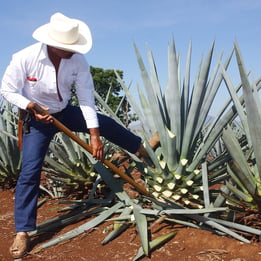 The history of tequila is tied directly to the Mexican city of the same name, but Mexican pride for the spirit is still a strong symbol of its place in the world. In 1974, the Mexican government trademarked the term "tequila" as its own intellectual property, signifying that "true" tequila was made only within the city of Tequila.

With the boom of tequila production in the past half-century (there are more than 1,000 brands sold today), that rule has been loosened to include several towns in states in the same area. But to this day, it's still illegal for other countries to produce and market their own spirits as "tequila".

As tequila gained popularity in the US, so too did cocktails, including the Tequila Sunrise, a one-hit wonder that captured the taste of the early 1970s (with a little help from Mick Jagger and the Eagles) before succumbing to the more established, more refined, now-classic margarita.

Think you'll remember all that info about the millennia-long history of tequila to impress your friends on Cinco de Mayo? Whether or not the story sticks with you, you should gather your besties for a virtual happy hour and try out this easy, delicious margarita recipe from Haskell's.