A Look Back at Industry Pioneer Fritzi Haskell

The name on our stores has a long tradition and a wonderful history. It's the name of Fritzi Haskell. "Fritzi was a real pioneer in the wine business. She brought in the first container of wines into the USA after prohibition," says CEO of Haskell's Jack Farrell. "She was promoting wine while the rest of the country was getting over moonshine and bathtub gin." 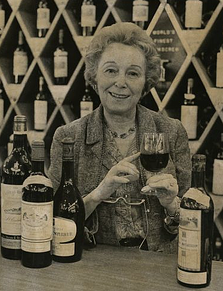 Though she was often the lone woman visiting wine cellars and sniffing corks, Fritzi became an industry icon and was on a first-name basis with many European wine houses. Says Farrell, "When you consider she was a woman and from a small city in the middle of the country....what a remarkable achievement."

Fritzi – who was married to boxer and convicted bootlegger Benny Haskell – took the helm of their first store in downtown Minneapolis in 1934. Benny's legal past had gotten in the way of him obtaining a liquor license, so Fritzi did instead. Benny managed spirits (under-the-radar), while Fritzi became the company's figurehead and wine expert.

"In 1936 when the rest of the country was drinking gin fizzes, she was scouting the great vineyards of Europe to get people accustomed to drinking wine," says Farrell.

Being the first to bring foreign wines into the United States after Prohibition wasn't the only reason Fritzi was a pioneer. In 1967, Haskell became the first woman to address the Wine and Spirits Guild of America.

Changing of the Guard

Fritzi sold the company to Farrell in 1970, who kept her pioneering spirit alive, being the first to bring in Nouveau Beaujolais to America and the second retailer to offer wine futures. Also, Haskell's was the first out-of-state client for many American wineries, including Caymus, Diamond Creek, and Concannon.

Cheers to you, Fritzi. We hope we're making you proud.