How a WWII Veteran (Almost) Smuggled $5,000 of Haskell's Liquor to the Pacific 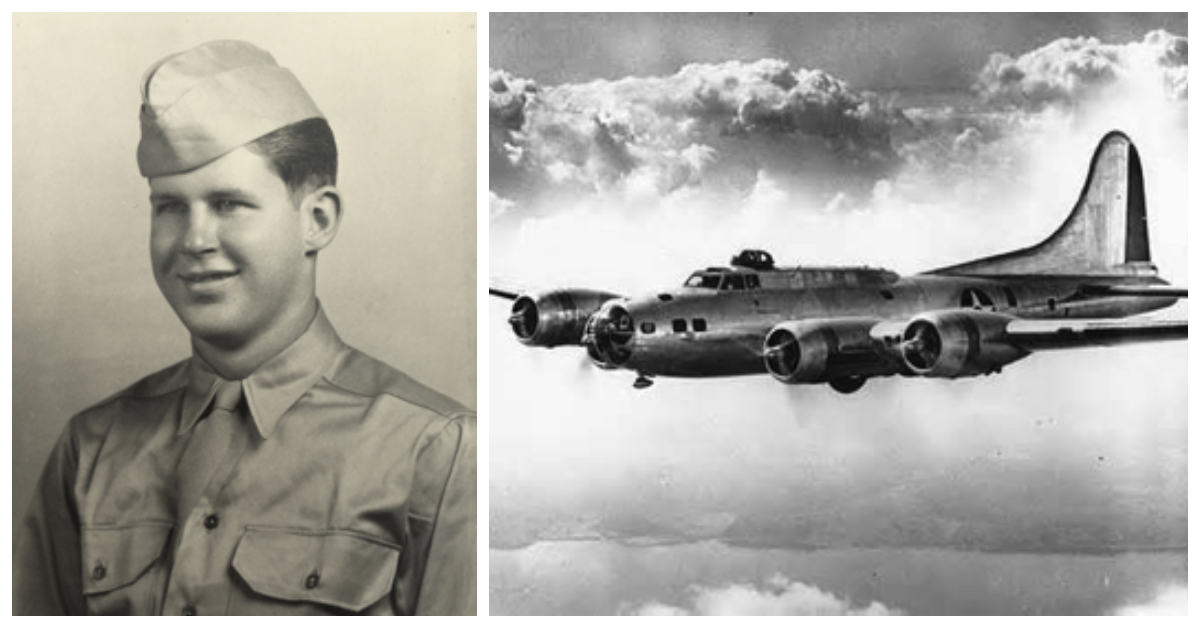 This story was originally written by Minneapolis-based writer Dave Arundel.

This Veterans Day, we'd like to share this little-known story about Haskell's, World War II, a veteran named Armand Crump — and some missing whiskey.

Armand Crump and the B17 "Flying Fortress," a plane that would hide thousands of dollars of liquor for servicemen in World War II.

In 1942, Armand Crump, age 18, was sent by the Army Air Force to Yale University to attend Aircraft Engineering Officer School. After completing a one-year course, he joined the Army Air Force with the rank of 2nd lieutenant. He ended up at Biggs Field, the Army Air Force base in El Paso, Texas. At the ripe old age of 21, Armand was in charge of keeping 16 B29 bombers shipshape and ready to enter combat. He had 150 mechanics and 2 clerks under his command.

The war had ended in Europe, and word was that Armand’s B29’s were going to be leaving soon, assigned to the war in the Pacific. Word had come back from the Pacific that alcoholic libations were in short supply, and Armand’s mechanics were getting antsy. A couple of the mechanics came to the boss with an idea: “Let’s take up a collection and buy a bunch of liquor to take with us when we fly out to the Pacific.” Simple enough. The clerks mimeographed a couple grids. Money was collected and accounted for by each man. The men even listed their favorite beverages on the requisition sheet.

The word got out that Armand’s office was going to make an alcohol run. Suddenly, everyone wanted in on the buy – pilots, officers, cooks, MP’s… all told, they collected over $5,000. (That was quite a sum, considering the mechanics earned $20-$30 per month in pay.) The money was put in bags, and Armand and a few clerks headed into El Paso and the surrounding area. But the shelves were empty at every store they attempted to buy liquor at.

No one thought this would be so hard. They had over $5,000 in cash to buy booze, but there was no booze to buy anywhere. The only pay phone was at the NCO club, and they used brown bags of quarters to call Albuquerque, New Orleans, Phoenix, Chicago, and all over Texas. No luck.

Finally, in a call to a distributor in Florida they were told, “There is only ONE guy who can get you what you want. His name is Haskell… and he is an old bootlegger. He runs an operation out of the Twin Cities.” Bingo! The next call was to Benny Haskell. Armand made the call, and Benny confirmed: he could supply $5,000 worth of liquor to the men stationed at Biggs Air Field in El Paso, Texas. The deal was struck.

Honeywell had an airstrip near their plant in Minneapolis. Haskell said, “There's a payphone at the field. Call us when you arrive.” The Executive Officer at the base was in on the deal and approved the dispatch of a B17 Bomber to make the pick-up. The plane left El Paso with two pilots, Armand Crump, and $5,000 in cash. When they landed at the dirt strip at Honeywell, a truck was dispatched to pick up Armand and bring him to Haskell’s while the pilots stayed with the bomber. The B17 “Flying Fortress”

When Armand arrived at the warehouse, it was obvious Benny could fulfill his end of the bargain. Two trucks were loaded to the gills with $5,000 of liquor at wholesale prices. Back at the airstip, the booze was loaded onto the plane – and, according to Armand, not strapped down in any way.

The pilots were getting uptight because it was getting dark, and the field wasn't lit. The pilots were now worried about accomplishing a successful takeoff with their new payload. The crew enlisted the help of the truck drivers to push the B17 to the end of the dirt strip, bordering a cornfield, to give them more runway for a safe departure.

An uneventful flight brought them back to Biggs Field in El Paso. Two mechanics were assigned to guard the booty. Then, the Executive Officer delivered bad news: Because the liquor wasn't on the lading (a list of the exact items on each plane for weight distribution and loading purposes), it wouldn't be coming with them to the Pacific.

But even the Executive Officer, the bearer of bad news, was as thirsty as all the other guys. So he came up with a plan: Divide the cartons of booze into 16 lots, hide it in various compartments on the 16 bombers heading to the Pacific.

With the booze hidden, the squadron was off to the Air Base at Kearney, Nebraska, which was the final staging area before they flew to the Pacific. The planes were cleaned, maintained, fueled and lined up for final inspection, with $5,000 of liquor hidden in their airframes!

Armand was at the Officer’s Club in Kearney, Nebraska, when the news broke: the war with Japan was over. Armand had trained for three years for the chance to fight the Japanese in the Pacific, but it was not to be. The “war to end all wars” had ended without his squadron seeing any duty in the Pacific.

Upon hearing the news, Armand raced out to the flight line to join the gathering crowd. He got there just in time to witness the mechanics tearing the bombers apart to get at the hard-won, well-hidden booze.

What Made it Out – and What Didn't

Of the 3,970 B29’s deployed between 1943 and 1946, it's hard to estimate how many might still be in existence. But if any of those planes stationed at Biggs Air Field in El Paso survive, they might be still carrying some fine, vintage whiskey – courtesy of Haskell’s!

Not everyone who signed up got to the front. Many were based stateside or worked in behind-the-scenes jobs. Many, like Armand, prepared for something that never happened. I am glad Armand did not go to the Pacific… chances are he would not have come back, and if he had not come back, I would not have the dear friend I now have.

Here is a recent photo of me taking my adventurous friend Armand Crump on a motorcycle ride in California at age 90!